And another 6 months has gone by……

Posted on March 30, 2014 by countryyarnscrochet

Maybe I just felt that there was nothing happening that would interest crocheters? Let’s see, what has happened in my crochet world? I had a “crochet depression” that lasted from last summer around Christmas, and No crocheting at all during that time. It happens! But since then, the hook has been busy. A Minion hat for a great-nephew, a few doilies, 5 baby blankets using some vintage Susan Bates sport weight yarn, and now a runner using an old Coats & Clark pattern. The runner is the center of my crocheting right now, although not the only piece I’m working on right now.  Because I have made some adjustments to the pattern, this is a good place (along with Ravelry) to post my notes.  Here is a scan of the center of the piece: 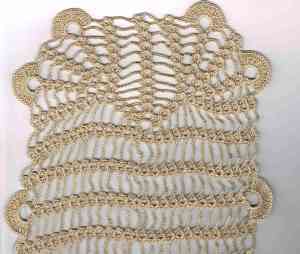 Posted on September 11, 2013 by countryyarnscrochet 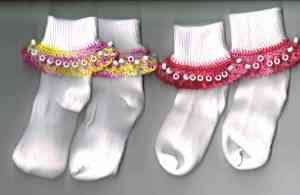 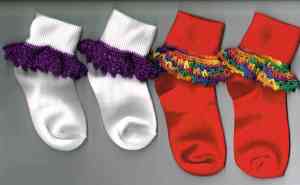 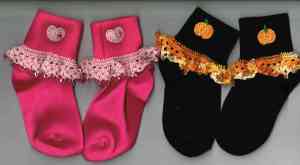 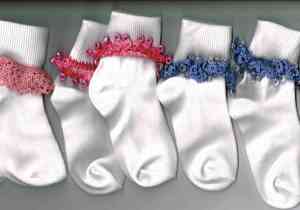 Some of the first ones. 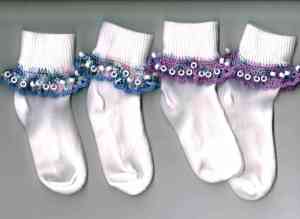 More tiny ponybeads. Love how they show up in the variegated threads!

Yes, it’s been well over a year since my last post. I had one of my “off” years of no crocheting, which comes around about every 10 years but usually doesn’t last this long. Considering that crocheting (doing, collecting, and selling) has been such a big part of my life since my mother taught me when I was 12, it’s hard to believe I just quit cold. But now the bedspread for a cousin, which had only 3-1/2 rounds of border to finish when I quit crocheting, is finished. Now to sew in all the ends and take pictures. Hopefully that will be inspiration to finish the oval pineapple tablecloth and start on the next tablecloth in line.

But what got me back in the mood was a mention from my daughter-in-law that she had not even had time to crochet some sock trims for her young nieces. So I told her to mail them to me, and I would have some finished for her when she visited in a week. The socks (and beads) arrived, and I start a hunt for patterns with Ravelry. If you’ve been out of the mood like I was, that’s a great place to go and get back in the mood.

Besides the fellowship of like-minded knitters, crocheters, and other fiber-fiends, Ravelry is a tremendous search resource when hunting for ideas, sources, patterns (for sale and free) that just isn’t found anywhere else. Looking for one more skein of that discontinued yarn to finish a project? Put out a request on the In Search Of forum or browse stashes to see if anybody has some they would be willing to sell. Looking for the pattern for that bedspread a beloved aunt crocheted back in the 1950s? Do a pattern search and then narrow down the parameters and see if a picture pops up. It’s amazing!

So, I’m exploring Ravelry and find some cute sock trims that somebody crocheted and there’s mention of the pattern source, Crochet World February 2013. Ooh, I have a subscription and that entitles me to use the electronic edition on their website! After the first pair, made with beads instead of buttons because I didn’t have enough of one kind, I was hooked. And because of Ravelry I could get in touch with the designer of the pattern and thank her for her inspiration. After the first few pair, there was the need to do “something a little different”, and the search was on for motif/applique/fridgie patterns crocheted with yarn, that would be tiny crocheted with thread.

So, here’s what has come off the hooks so far. but I’m sure there will be plenty more. My neighbor has several young girls in her life, and she will be bringing me socks. I have 2 small great-nieces who might like them. The list is probably going to expand LOL

Posted on March 28, 2012 by countryyarnscrochet

My goal was 52 this year, one per week, but I’ve made over 40 already. They’re like the dessert of crochet!

Posted on March 28, 2012 by countryyarnscrochet

Have I been busy or what?

Posted on March 12, 2012 by countryyarnscrochet 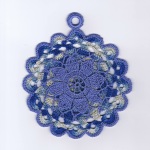 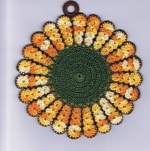 Posted on January 24, 2012 by countryyarnscrochet 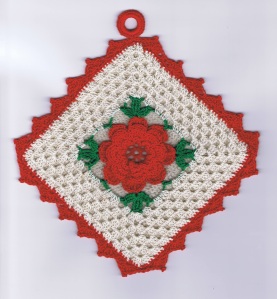 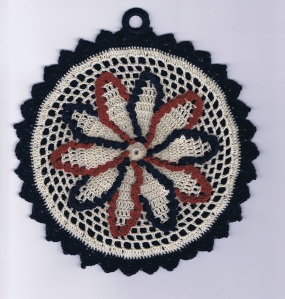 Be prepared, I’m on a potholder binge. And until it runs it’s course, I’ll be “finding” potholders in all kinds of patterns. But first here are a few more that I’ve crocheted in the last few days. The rose is a vintage pattern and can be found in a lot of places, and the starburst is also vintage in lots of variations.

Where does the time go?

Posted on January 17, 2012 by countryyarnscrochet 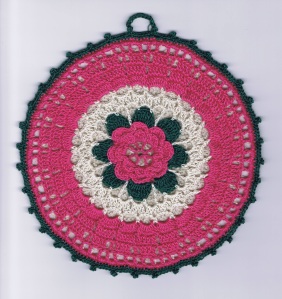 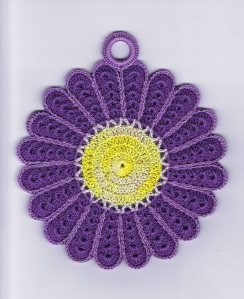 It’s been months since I posted, and the baby blanket is still nicely rolled up beside my Crochet Spot in the den! My husband has decided that I miss the interaction with my customers and that I need to start going to the craft shows again after 20 years, so we’ve been going to a little flea market about 20 miles from here. Papa D’s on Facebook, if you’re interested in that kind of thing.

That means that I need to start crocheting marketable things again, and that hasn’t been done for so long that my mind just goes in circles trying to think of things to sell. What sold the last couple of months was girly hats for little girls. And Christmas stuff. And the ever-popular baby blankets, the same pattern I came up with back in the 30-plus years ago. But what I’m in love with right now are thread potholders. You know, those things that are really not serviceable that your grandmother had hanging on her kitchen wall, and she threatened you if you dared try to use it. “Aunt So-and-so made that for me, and I love it – don’t use it!” Those potholders… Here are a couple that I’ve made since the New Year.

And here is the potholder pattern that I actually use, the only one I use in the kitchen because it is double thick but made in one piece.  No, it’s not “that” one, but this one:

The potholder pattern is about 1/2 way down the page.  I bought the pattern set back in the very early 1980s, but Sally George’s daughter put the patterns up on her own web site free in memory of her mother.  The potholder is a little tricky to start, but once you get in the rhythm of it you’ll love it.  It’s my take-along project for road trips because I don’t need the pattern anymore!

Posted on October 7, 2011 by countryyarnscrochet

More samples. The thread on these two seems smaller, so I’m assuming it was not the same crocheter as my other post. These use a lot of the commercial trims that were available in the early 1900s, like a picot strip that is _maybe_ 1/8″ wide as shown on the top right column of the partially finished page. You have to look really close (click on the picture to enlarge) to see that the “rims” of those wheels are actually not crocheted but strips of trim. To the left of that one, the lozenge-shaped areas are not crocheted, but commercial trim that is the base for the crochet work. Below that, tiny rick rack is used! I’m wondering if they came up with the designs themselves or used a commercial pattern. I’ve seen a couple of rick rack books but nothing that uses all the other trims so effectively.

Posted on September 18, 2011 by countryyarnscrochet 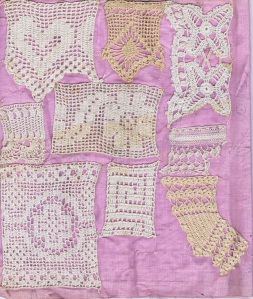 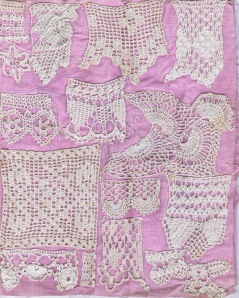 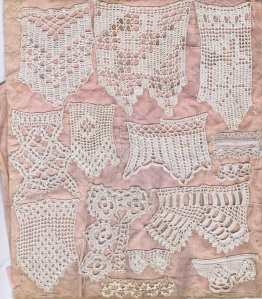 I’m about finished with the “frame” for the baby blanket, but in trying to do some cleaning up in my office (aka the dining room with no table) I found this set of sampler pages that came from eBay years ago. There’s no date and no name, but some crocheter decades ago (maybe 100 years!) copied them from someone else’s work or possibly one of the scarce pattern books of that time. I can’t speak for other crocheters, but the old books and the old work pull at me in a way no modern work could. Modern is not bad, but it doesn’t tell me a story the way these pieces do. That could be because back in the 1960s my grandmother gave me a 1915 Royal Society crochet leaflet with her notes in it from when she crocheted the yokes to a couple of nightgowns for her sister-in-law, my great-aunt Argent who married in 1916. It never even occurred to me that there were avid crocheters and pattern books back then; my grandmother probably was more of a seamstress than a crocheter anyway.

As you can see, they are tacked to solid color fabric.  What you can’t see is that only 1/2 the fabric is used for the samples, and the other 1/2 doesn’t have anything on it.  They seem to be like large pages of a fabric book, so maybe the plan was to eventually sew them together for a sampler album which would have pages larger than standard book pages.  The fabric has been stamped with what looks like tapework patterns (Battenburg?) on one fabric and large flower patterns on the other.  Waste not, want not!  The thread is at least size 30, if not smaller, and many of the designs were crocheted onto commercial insertion laces.  Note the piece at the center bottom of the bottom left photo; that is tiny, tiny rick-rack that in arranged in circles and crocheted together!

I wish these were my grandmother’s work.  But I can still pretend.

Diary of a Project – part 2

Posted on September 13, 2011 by countryyarnscrochet 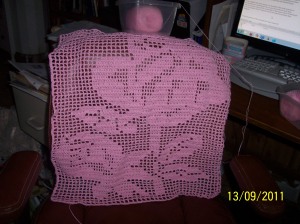 Smile for the camera!

The filet center of the blanket is now finished, although it looks more like a “big, fat rose” than a long-stemmed beauty! Other than the problem between my brain and the new stitches I encountered, it went well. I had to ignore my brain saying “2 ch, 1 dc” make a space and just follow the chart exactly; on some rows it was a surprise when the stitch count worked out! Since it was 44 spaces wide and 61 rows tall, I expected it to end up taller than wide, and it is but not very much. Seems like I forgot to take into account that (at least for me) 2 strands of soft thread worked together has a lot more of a yarn behavior than ordinary thread; yarn has a lot more spring and will stretch while being worked but relax when it’s left alone again.

But we’ll work with what we have, because I’m not frogging now! I’m almost finished with a row of sc around the piece to give me some “real” stitches to work into; it also gives me a chance to see how I need to adjust the stitches and the first decision was alternating 2sc and 3sc in the ends of the rows instead of 3 sc in each end. Previous experience has taught me that 3 stitches in the ends of the rows can result in a ripple effect along the side of the piece because of too many stitches on the side. It definitely looks better this way, and I think the weight of the border will sort of block out any remaining ripple. The top and bottom have 3 sc in each space, and the corners have 3sc in each. After the sc row is finished, I’m considering maybe a few rows of checkerboard will look good as a sort of frame for the rose. I’m afraid that if I do solid dc all around it will start to ruffle, and open blocks might draw up the sides of the border.

One other trick that I (and a lot of other crocheters) use is to place a marker on every 10th row of the piece, because I know I’m going to lose my count and have to count back. I also took a red pen and drew a line between every 5th and 6th row even though there was one marking every 10th line.